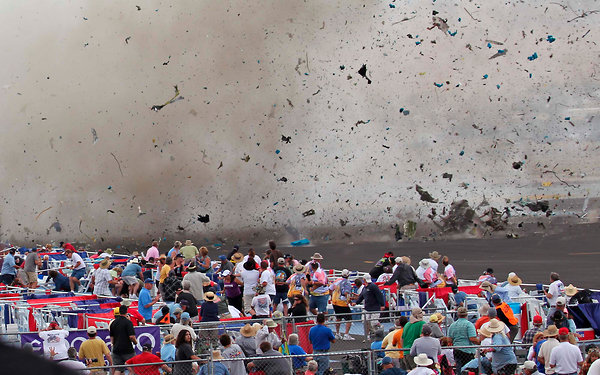 Air shows have become a staple of American life. But something went terribly wrong yesterday in Reno, NV, as a heavily modified, vintage World War Two P-51 fighter plane able to fly ass fast as 500 mph and make passes as low as 50 feet crashed into the grandstand killing nine people including the elderly pilot and injuring more than 60 spectators.

The plane, a P-51 Mustang dubbed the “Galloping Ghost” that was being flown by well-known pilot Jimmy Leeward, crashed into a box seat area in front of the main grandstand at the Reno Air Races, said Mike Draper of public relations firm R&R Partners, which represents the race.

“I heard his engine and looked up. He was within 100 feet. He was coming right down on top of us,” witness Fred Scholz told CNN, adding that the plane had first flown closer to the stands than allowed. “It just happened very quick.”

Video apparently taken from the stands and posted on YouTube showed a plane plunging nose-down into the tarmac as spectators were heard gasping: “Oh, my God.”

Debris billowed near the crash site, and officials then told spectators to remain where they were so emergency workers could get to the scene.

“It was like a war zone where the box seats were,” said Dean Davis, an Oregon man who has attended the Reno Air Races for decades. “All the people were laying there.”

Video of the crash was posted on You Tube.