Anthony Weiner Was a Bigger Freak than Anyone Knew 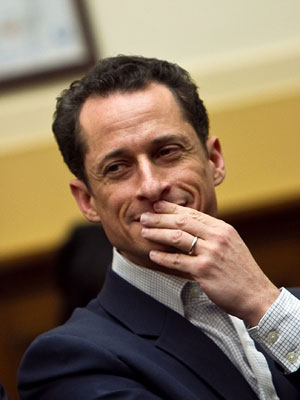 Excerpts from the new book “I Freinded You” by Traci Nobles, the 35-year-old former cheerleading coach Anthony Weiner diddled online, reveals the former Congressman was a bigger freak than anyone — including his glamorous wife, State Department staffer Huma Abedin, ever knew.

The Daily Mail in London reports:

· Weiner accused his Muslim parents-in-law of being “backwards thinking”, and never accepting him because he’s “Jewish,” implying they’re anti-Semitic

· “It’s a big office and you know that’s not the only thing here that’s big. I had to do some wiping in the bathroom hehe”

Weiner resigned from his New York Democratic Congressman position in June after the sensational ‘sexting’ scandal became public. His wife, Huma Abedin, an aide to Secretary of State Hillary Clinton, is pregnant and expected to deliver in January.