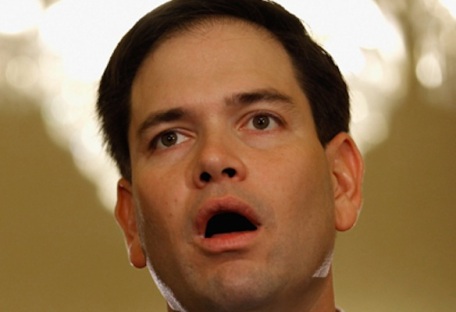 FL Sen. Marco Rubio has something in common with Sarah Palin

Sen. Marco Rubio (R-FL) declined to tell GQ Magazine how old he thought the earth is. Instead Rubio hid behind the so-called Young Earth Creationism view, saying it’s “one of those great mysteries.”

“I’m not a scientist, man. I can tell you what recorded history says, I can tell you what the Bible says, but I think that’s a dispute amongst theologians and I think it has nothing to do with the gross domestic product or economic growth of the United States. I think the age of the universe has zero to do with how our economy is going to grow. I’m not a scientist. I don’t think I’m qualified to answer a question like that. At the end of the day, I think there are multiple theories out there on how the universe was created and I think this is a country where people should have the opportunity to teach them all. I think parents should be able to teach their kids what their faith says, what science says. Whether the Earth was created in 7 days, or 7 actual eras, I’m not sure we’ll ever be able to answer that. It’s one of the great mysteries.”

Oy Vey! The majority of scientists who study such things concur our earth is 4.54 billion years old based on evidence from radiometric age dating of meteorite material.

If Rubio’s bizarre response to GQ’s question sounds familiar, well, it should. Sarah Palin told the Los Angeles Times, “dinosaurs and humans walked the earth at the same time.”

Marco Rubio, a Cuban-American, is rumored to be a potential Republican candidate for president in 2016. Republicans believe he can successfully attract Hispanics to the GOP.