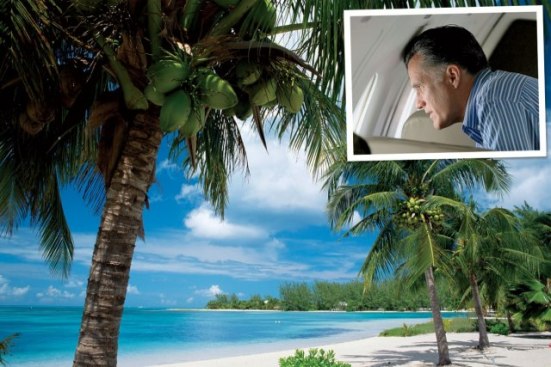 There’s been much speculation about Mitt Romney’s numerous, murky offshore tax havens. I would argue much of the speculation can be traced to Romney’s refusal to disclose how many millions he and wife Ann have stashed in the Cayman Islands,  Luxembourg, Ireland, Switzerland and Bermuda.

Luckily for us, Greg Gordon at McClatchy Newspapers meticulously delved into the complex world of Mitt Romney’s finances and he’s discovered Romney’s former private equity firm used a half-dozen companies and partnerships in the tax havens of Luxembourg, Ireland and the Grand Caymans four years ago to channel $689 million in loans to a U.S. company that it co-owned.

This is only one of a maze of transactions involving the Romney family portfolio that were engineered in tax-neutral nations. The gradual emergence of outlines of these deals in recent weeks has prompted experts to challenge Romney’s pronouncement that his scores of offshore investments haven’t lowered his federal taxes by so much as a dollar.

The offshore deals are generally legal, typically structured to shield pension funds, foundations and other tax-exempt organizations from U.S. taxes, and foreign investors from U.S. taxes or taxes in their own countries. The California State Teachers’ Retirement System, for example, has since 2006 invested more than $500 million in three of the funds in which Ann Romney’s trust holds a stake.

As of Dec. 31, 2011, Romney and his family had as much as $50 million or more invested abroad, according to his disclosures. His extensive offshore investments have drawn scrutiny for multiple reasons:

• By refusing to release more than two years of his tax returns, fewer than most party nominees in recent presidential elections, Romney has fueled suspicions that he has something to hide, perhaps related to his offshore investments.

• Documents released to date have enabled Democrats to paint the former Massachusetts governor as an aristocrat who’s capitalized on tax loopholes that are out of reach for average Americans.

“I admit I’m in many ways not sympathetic to his candidacy, but it does really raise questions about his thinking and about his values.”

Among the transactions that have piqued interest are those flowing from Bain Capital’s purchase of ownership interests in two U.S. chains, the arts and crafts retailer Michaels Stores and HD Supply Inc., Home Depot’s former home improvement supply arm, whose sales were hurt by a sharp downturn in the housing market when it was acquired in 2007.

In each case, Bain Capital and its co-owners later bought back debt at a fat discount as those companies struggled for survival. Michaels Stores’ outstanding debt fell by $164 million to $28 million. At HD Supply, Bain bought $953 million in debt for $689 million, a drop of $264 million.

The Internal Revenue Code normally imposes a 35 percent tax on the sum of canceled debt if it was purchased by the underlying company or a related party. By lending through Luxembourg, and in HD Supply’s case through a string of companies in Luxembourg, Ireland and the Caymans, Bain created separation from those businesses, tax lawyers said.

Unfortunately for the American people, who will shoulder the burden of Romney’s creative tax avoidance scheme, the U.S. Congress — who writes tax law, weren’t clever enough to stay a step ahead of a scoundrel like Mitt Romney.