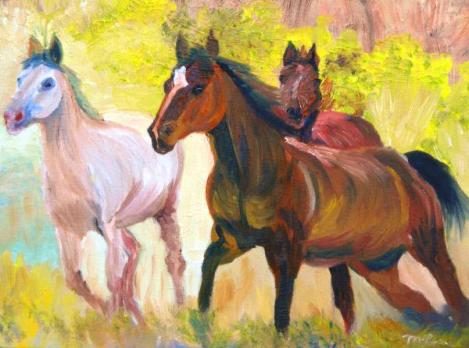 Consider this my epiphany regarding President Obama. I will not vote to reelect him on November 6, 2012.

Not a loaded gun pointed directly to my head could not compel me to vote to reelect this son-of-a-bitch.

Horse slaughter plants are legal again in the United States. Restrictions on horse meat processing for human consumption have been lifted.

In a bipartisan effort, the House of Representatives and the US Senate approved a Conference Committee report on spending bill H2112, which among other things, funds the US Department of Agriculture.  On November 18th, as the country was celebrating Thanksgiving, President Obama signed a law, allowing Americans to kill and eat horses. Essentially, one turkey was pardoned in the presence of worldwide media while in the shadows, buried under pages of fiscal regulation, millions of horses were sentenced to death.

Horse slaughter has been prohibited in the United States as funding for inspections of horses in transit and at slaughter houses was non-existent. This worked because the horse meat cannot be sold for human consumption without such inspections. The House version of the bill retained the de-funding language and the Senate version did not. The conference committee charged with reconciling the two opted to not include it. The result is that it is now legal to slaughter horses for humans to eat.

Notwithstanding that 70% of Americans oppose horse slaughter, that President Obama made a campaign promise to permanently ban horse slaughter and exports of horses for human consumption (horses can be sent to Mexico and Canada), that documentation of animal cruelty, slaughterhouse stench, fluid runoff and negative community impact exists, it is taxpayers that will bear the costs!

Wyoming state representative Sue Wallis and her pro-slaughter group estimate that between 120,000 and 200,000 horses will be killed for human consumption per year and that Oregon, Idaho, Wyoming, Montana, Nebraska, North Dakota, Georgia and Missouri, are considering opening slaughter plants.

During these trying times, is the only thing that Democrats and Republicans can agree on is that Americans need to eat horses?