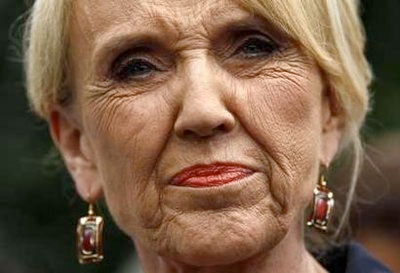 Arizona Gov. Jan ‘the Klan’ Brewer signed a bill Monday mandating that straight, married couples be given priority consideration when state agencies are placing children for adoption or foster care.

Brewer signed the bill despite receiving 500 postcards at her office from supporters of Equality Arizona asking her to veto the bill.

Tom Mann, board chairman for Equality Arizona, criticized the governor in a statement Monday.

“The governor’s action today is harmful to children in foster care and group homes who are seeking a permanent home and the support of a loving, caring family. SB 1188 takes the focus off of what’s in the best interest of a child when adoption decisions should be made on a case-by-case basis, according to what’s in a child’s best interest. Each case is unique. For example, adoption authorities may have the choice between placing a child with a beloved single aunt — or complete strangers. The only consideration should be determining what’s in the best interest of the child.”

Needless to say, conservative groups cheered Brewer’s action saying children belong in households with a mom and dad. However, critics said the bill will also discourage singles from considering adoption in Arizona. About one-third of the foster children in Arizona are adopted by an unmarried person.