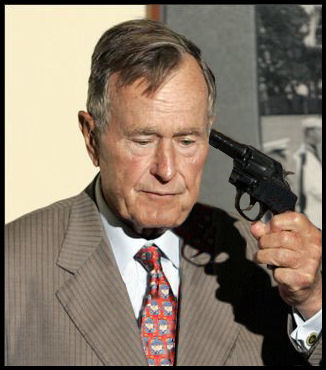 A syrupy confection to honor former President George HW Bush titled All Together Now: A Celebration of Service was a ratings bomb for NBC and proved no match for ABC’s juggernaut, Dancing with the Stars, which crushed the cornpone event.

The special, filmed at the Kennedy Center on March 21 and meant to highlight Poppy Bush’s devotion to volunteerism, was about as popular as a case of swine flu.

Co-chaired by former president Bill Clinton, with musical entertainment by Carrie Underwood, Garth Brooks, Cee Lo Green, Sheryl Crow, Kid Rock, and Poppy’s close friend, Reba McEntire but all the star power in the world did nothing to help the terrible ratings.

The hour-long extravaganza managed a paltry 0.9 rating in the all-important 18-49 year old demographic with a miniscule 4.2 million viewers overall compared to ABC’s Dancing with the Stars which dominated the timeslot averaging 22.3 million viewers.

Even Univision’s Spanish language novela Eva Luna crushed NBC’s All Together Now: A Celebration of Service in the ratings.

8 Responses to Poppy Bush Special a Ratings Bomb for NBC