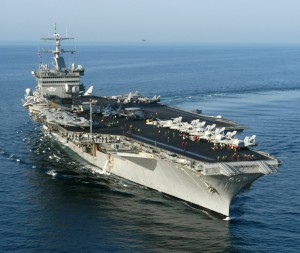 Got to love the United States Navy.

CNN reports the Navy has opened an investigation into how a series of freaky videos, full of raunchy sexual innuendo and homophobic remarks, were produced and shown to the crew of the aircraft carrier USS Enterprise while on deployment supporting the wars in Iraq and Afghanistan.

Navy spokesman Cmdr. Chris Sims said the videos, which were shown to the crew in 2006 and 2007, are “inappropriate.”

Excerpts from the videos and descriptions of their content were first published Saturday by The Virginian-Pilot newspaper in Norfolk, Virginia.

The videos on the paper’s website, reviewed by CNN, feature a man identified by two Navy officials and The Virginian-Pilot as Capt. Owen Honors, who at the time was the executive officer, or second-in-command, of the Enterprise. He recently took command of the carrier, winning one of the most coveted assignments in the U.S. Navy, which has only 11 aircraft carriers.

Honors is shown cursing along with other members of his staff in an attempt to demonstrate humor, according to videos. There are also anti-gay slurs, simulated sex acts, and what appear to be two female sailors in a shower together.

The investigation was ordered Friday by Adm. John Harvey, the four-star head of the Navy’s Fleet Forces Command, after the videos were detailed in The Virginian-Pilot. The paper also posted a link to some of the material, but edited it so that expletives were censored and some identities of junior Navy crew were disguised.

The Navy issued a statement Saturday, saying in part “production of videos, like the ones produced four to five years ago on USS Enterprise and now being written about in the Virginian-Pilot, were not acceptable then and are still not acceptable in today’s Navy. The Navy does not endorse or condone these kinds of actions.”

The statement also said, “U.S. Fleet Forces Command has initiated an investigation into the circumstances surrounding the production of these videos; however, it would be inappropriate to comment any further on the specifics of the investigation.”

But the Saturday statement was an about-face from the initial military statement to the newspaper. In that statement, the Navy said the videos were “not created with the intent to offend anyone. The videos were intended to be humorous skits focusing the crew’s attention on specific issues such as port visits, traffic safety, water conservation, ship cleanliness, etc.”