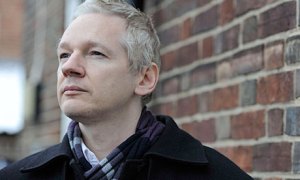 Wikileaks founder, Julian Assange fears he will be killed “Jack Ruby-style” in prison.

This is one of several stunning revelations in a UK Guardian interview conducted at Ellingham Hall, the Norfolk country mansion where he is living under virtual house arrest. Assange says it would be difficult for the British Prime Minister to hand him over to the American hyenas in the Obama administration if there is strong support for him from the British people.

“It’s all a matter of politics. We can presume there will be an attempt to influence UK political opinion, and to influence the perception of our standing as a moral actor,” he said.

Assange is fighting extradition to Sweden. He strongly denies allegations of sexual misconduct with two Swedish women. But he believes the biggest threat to his freedom and to WikiLeaks — his whistleblowing website, emanates from a wrathful United States.

According to Assange, the Obama administration is “trying to strike a plea deal” with Bradley Manning, the 23-year-old intelligence officer and alleged source of the more than a quarter of a million U.S. diplomatic cables embarrassingly leaked last month. U.S. Attorney General, Eric Holder, wants to indict Assange as a co-conspirator and is also examining “computer hacking statutes and support for terrorism,” Assange says.

If the U.S. succeeded in removing him from the UK or Sweden, Assange said there was a “high chance” of him being killed “Jack Ruby-style” in the U.S. prison system.

Assange also said WikiLeaks did not have enough money to pay its legal bills, even though “a lot of generous lawyers have donated their time to us.” He said legal costs for WikiLeaks and his own defence were approaching £500,000. The decisions by Visa, MasterCard and PayPal to stop processing donations to WikiLeaks, apparently following U.S. pressure, had robbed the website of a “war chest” of around €500,000, he complained. This would have been enough to fund WikiLeaks’ publishing operations for six months. At its peak the organization was receiving €100,000 a day, he said.

According to publishing sources, Assange has secured a seven-figure advance for a book about WikiLeaks and his life story. The sources suggest he is likely to receive £250,000 himself, allowing him to pay off some of his debts and to settle his personal defense fund. The book is to be published in the spring by Knopf Publishing in the U.S. and Canongate in the UK, sources suggest.

Assange argues that Prime Minister Cameron is in a stronger position than the previous Labor governments to resist his extradition to Washington. “There is a new government, which wants to show it hasn’t yet been co-opted by the U.S.,” he said, claiming that the security services – British and Australian, have a history of spying on and unduly influencing Labor politicians.