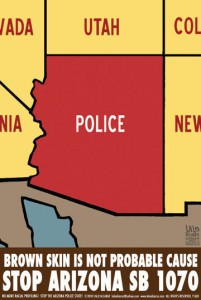 Opponents of Arizona’s draconian new immigration law were handed a major victory today when a Federal judge blocked a provision requiring police officers to check a person’s immigration status while enforcing other laws such as a routine traffic stop.

Judge Susan Bolton also delayed parts of the law that required immigrants to carry their papers at all times, and made it illegal for undocumented workers to solicit employment in public places, a move aimed at day laborers. In addition, the Judge Bolton blocked officers from making warrantless arrests of suspected illegal immigrants.

Bolton, a Clinton appointee, wrote in her decision:

“Requiring Arizona law enforcement officials and agencies to determine the immigration status of every person who is arrested burdens lawfully-present aliens because their liberty will be restricted while their status is checked.”

She said the controversial sections should be put on hold until the courts resolve the issues, chiefly whether SB 1070 violates the Supremacy Clause of the US Constitution. Other provisions of the law, many of them procedural and revisions to existing Arizona immigration statute, will go into effect at 12:01 a.m. Thursday.

The law was signed by Gov. Jan Brewer in April and immediately revived the national debate on immigration, making it a hot-button issue before the midterm elections. The law has inspired similar law elsewhere and prompted a boycott against the state and led an unknown number of illegal immigrants to leave the state.

Brewer, tried to put a brave face on the ruling, telling the Associated Press:

“It’s a temporary bump in the road, we will move forward, and I’m sure that after consultation with our counsel we will appeal. The bottom line is we’ve known all along that it is The responsibility of the feds and they haven’t done their job so we were going to help them do that.”

Brewer is running for another term in November (she became governor after President Obama selected former Arizona Gov. Janet Napolitano to head Homeland Security) and has seen her political fortunes rise because of the law’s enormous popularity among conservatives.

“Jan Brewer played politics with immigration, and she lost. It is time to look beyond election year grandstanding and begin to repair the damage to Arizona’s image and economy.”