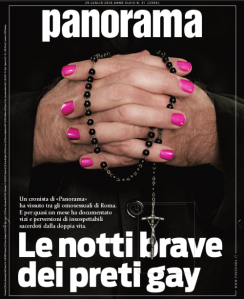 The story, titled “Gay Priests’ Nights on the Town” has caused a firestorm in Italy and infuriated the hypocrites in the Vatican. The diocese is now calling on priests who are gay, to step forward and “reveal themselves.”

If what I’m calling “The DaVinci Load” doesn’t blow the lid of the secret sex den called the Catholic priesthood, then nothing will and I predict, the church will cease to exist in another 25 years.

20 Responses to The DaVinci Load