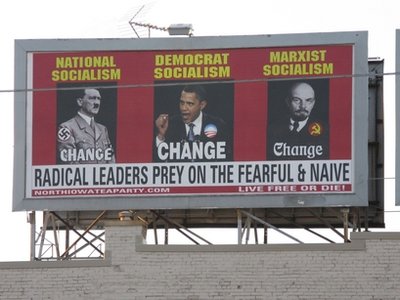 Beneath the photos is the phrase: “Radical Leaders Prey on the Fearful & Naive.”

While the billboard stirred local controversy, one Democratic activist from Mason City, a city of 30,000 people just south of the Minnesota state border, said he thinks the sign lays bare the views of teabagger loons.

“I welcome them to continue to spew that kind of stuff because I think it’s going to do a lot of good for the good Democrats around the state,” said Dean Genth.