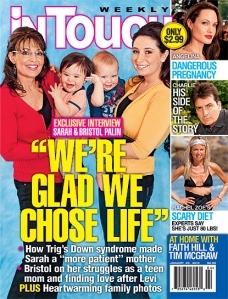 Sarah Palin and her daughter, Bristol, “earned an eye-popping $100,000 for their new In Touch Weekly cover, “according to the New York Post.

“For just eight hours’ work at her own home, Palin pocketed nearly as much as her $125,000-a-year salary as Alaska governor. It seems her decision to quit her political role is making big financial sense. Palin also reportedly earns $100,000 per public-speaking engagement, while she has a multiyear deal as a Fox News Channel analyst. Reps for the magazine and Palin refused to comment on the deal.”

But I suppose we shouldn’t be too hard on the world’s most famous soccer mom from Wasilla, AK. Now that she’s the lone bread earner for five kids, and her unemployed, lay-about husband, Todd. Someone needs to pay the mortgage, buy food and keep the utilities on.