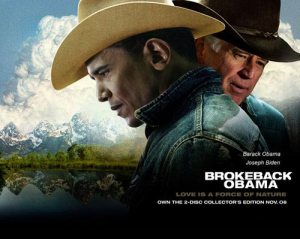 Can our community’s “fiercest advocate” please make up his fucking mind? In a move consistent with previously contradictory behavior vis a vis LGBT issues, the Obama administration has directed its Justice Department to file an extraordinary motion to get a Log Cabin Republicans’ lawsuit against the ‘Don’t Ask, Don’t Tell’ law thrown out of court, despite a Federal judge’s ruling that it can proceed.

The 11th-hour move for interlocutory appeal, which seeks to stay proceedings and block discovery, was formulated at the same time President Obama was reassuring LGBT champagne queers that he firmly opposes ‘Don’t Ask, Don’t Tell’ at the Human Rights Campaign’s annual dinner just two weeks ago in Washington, DC.

According to Terry W. Hamilton, national Chairman of the Log Cabin Republicans:

“After President Obama clearly stated that his highest priority for the LGBT community was to repeal ‘Don’t Ask, Don’t Tell’, it is quite troubling to see this ‘about face.’ This aggressive move by President Obama’s Justice Department seriously undermines not only his commitment to our community and to the defense of our nation, but it also casts doubt on the motives of those at the highest levels of LGBT leadership in Washington who refuse to criticize the President over this double speak.”

The case in question, Log Cabin Republicans vs. the United States of America, is the first direct challenge to the ‘Don’t Ask, Don’t Tell’ in the wake of the Supreme Court’s decision in Lawrence v. Texas. It is also the only contemporary legal challenge to this law to succeed at the district court level. One of the injured parties named in the case, Alexander Nicholson, is a former U.S. Army Human Intelligence Collector who speaks multiple languages, including Arabic, and who was fired because of the ‘Don’t Ask, Don’t Tell’ just six months after 9/11. Another injured party in the case, listed simply as ‘John Doe’ currently serves in the Armed Forces and would face a discharge if his identity were revealed.

“These continued obstructions launched by the Obama Justice Department are as insulting to the LGBT community as they are a serious threat to our military readiness. The constant delay tactics and attempts to have this case hurriedly dismissed without any discovery or argument would be a disservice to all those who have been involuntarily and abruptly fired under this law.”

District Court Judge Virginia Phillips of the Central District Court of California will consider the defendant’s motion on November 16th, 2009.