Why Does Salon.com Employ Camille Paglia? 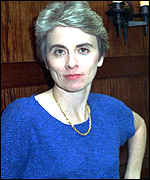 Camille Paglia, the lone Salon.com columnist who enjoys a support link to radical, rightwinger, Matt Drudge, appeared on NPR’s “On Point” yesterday and made a spirited defense of the “birther” movement. The exchange came about 36 minutes in, after one caller to the show recounted his experiences at the 9/12 march on Washington. Paglia snapped back at him:

First of all, I reject the idea that the “birther” campaign is motivated by racism. There may be racism among it, but there are legitimate questions about the documentation of Obama’s birth certificate. I’m sorry, I’ve been following this closely from the start. To assume that all those signs about the birth controversy were motivated by racism, that is simply wrong.

Paglia has been on this beat before, writing in April that “there were ambiguities about Obama’s birth certificate that have never been satisfactorily resolved.” But this particular interview is compelling, especially for Paglia’s convoluted explanation that she despises victim politics but thinks “The Sopranos” was a bigoted portrayal of Italian-Americans.

Why does Salon.com employee this woman?

16 Responses to Why Does Salon.com Employ Camille Paglia?