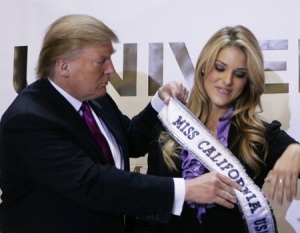 But the savvy Trump is said to be less than enthusiastic about casting the controversial, ex-beauty queen.

I must say, it would be a satisfying to hear Trump bellow “You’re fired” at Prejean. If he followed the pronouncement by heaving a pie in her face, I would immediately label the spectacle one of the greatest moments in reality television.

9 Responses to Carrie Prejean to Appear on ‘Celebrity Apprentice’