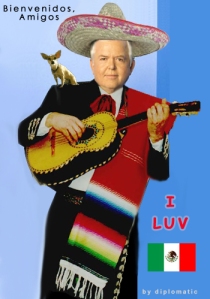 A lot of people have emailed to tell me Lou Dobbs’ embrace of the Birther movement is just a ploy designed to boost his flaccid ratings. They say Dobbs isn’t an evil xenophobe: he’s just trying to compete with FOXs’ uber-idiot, Bill O’Reilly for a few ratings crumbs.

Even Billo himself said as much the other night on his program:

“I mean, that’s—come on, I mean, it’s not true. Mr. Dobbs is trying to get ratings, trying to be provocative.”

While historically controversy is the tried and true method in cable news to gin up ratings, and Lou “Mexicans are responsible for leprosy” Dobbs could use a shot of Vamp blood to stop his ratings slide, Dobbs’ recent obsession with the president’s “mysterious” place of birth has not only failed to increase his ratings, it’s driving viewers away in droves.

According to The Observer‘s analysis of Nielsen TV tracking data, in recent weeks, as criticism of Mr. Dobbs continues to go up, his ratings at CNN continue to go down:

If Dobbs’ embrace of the Birthers movement is a just a cynical ratings ploy, as his defenders and even Bill O’Reilly claim, then it’s backfiring badly. If nothing else attracts the attention of CNN president Jon Klein, maybe hemorrhaging viewers will finally do it. The dark reaches of village insanity is a lonely place for “The Most Trusted Name in News” to find itself.

20 Responses to Lou Dobbs Bids Adiós to His Ratings