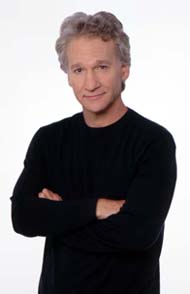 This is good. I’ve learned that the inimitable Bill Maher may be headed to MSNBC to fill the open 10PM time slot following Rachel Maddow.

MSNBC to wants to create a new show to fill the 10PM hour and Bill Maher is in contention.

It’s widely known in the cable news world that the third-place network has a longstanding interest in Maher, who now hosts a weekly current-events chat program, Real Time, on HBO. He’s an obvious choice, having hosted his own daily talk show, Politically Incorrect, until ABC ridiculously bowed to pressure from the Bush White House back in 2002 for making some poorly-received remarks about the Sept. 11 hijackers.

Though more libertarian than strictly liberal, Maher’s politics make him a good fit with MSNBC’s audience, which has grown in direct proportion to the network’s enthusiasm for the Democratic party. One caveat: Maher would probably be expensive (although Chris Matthews’s recent pay cut from $5 million a year to around $2 million, frees up some cash for that).

Offering Bill Maher the 10PM slot is brilliant. This would give MSNBC solid, nighttime programming beginning with David Shuster’s 1600 Pennsylvania Avenue at 6PM, followed by Chris Matthews’ HARDBALL at 7PM, next up the hugely popular Keith Olberman’s Countdown at 8PM, followed by The Rachel Maddow Show at 9PM. Stay tuned on this one.