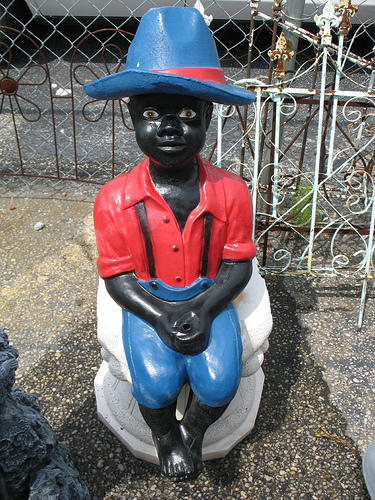 This is how Republican Vice Presidential candidate Sarah “McCandy” Palin described Barack Obama’s victory over Hillary Clinton to political colleagues in a restaurant a few days after Obama locked up the Democratic Party presidential nomination.

According to Lucille, the waitress serving Sarah Palin’s table at the time and who asked that her last name not be used, Palin was eating lunch with five or six people when the subject of the Democrat’s primary battle came up. The Alaskan governor, seemingly not caring that people at nearby tables would likely hear her, uttered the racial slur and then laughed loudly as her meal mates joined in appreciatively.

“It was kind of disgusting,” Lucille, who is part Aboriginal, said in a phone interview after admitting that she is frightened of being discovered telling folks in the “lower 48” about life near the North Pole.

Then, almost with a sigh, she added, “But that’s just Alaska.”

72 Responses to Sarah Palin: “So Sambo Beat the Bitch?”